Namita Shah is the cofounder of Presolv360, a legal tech company recognized by the Department of Justice, Government of India, which specializes in online commercial dispute resolution via electronic arbitration and mediation. She is a Chartered accountant and has past experiences in chartered accountancy and law. She was listed among the top 60 in the ‘Women Transforming India, 2018’ initiative of the GoI. She is also a part of various movements such as WEE Foundation (Women Entrepreneurship and Empowerment), AFI (Action For India), Agnii and MAHITHA Sedibus program.

Can you give us a brief idea about what Presolv360 is?

Presolv360 is a legal tech company where we specialize in ‘out of court’ dispute resolution. It is a faster, more efficient and most importantly, a cost-effective method where we see resolution getting solved on an average of 45 days with a legal binding whereas the Indian judicial system on an average would take not less than 17 years to solve the cases. Also, during this period not only is our money stuck but we are uncertain about the judgement as well.

What inspired you and your partners to start Presolv360?

The inspiration to begin with Presolv came while having a conversation with one of the founding members where we realized after having a professional experience that due to delay in judgments, it would cause a huge problem not only What inspired you and your partners to start Presolv360?

to companies but also to the families. As our prime minister Mr. Narendra Modi is promoting `Digital India’, this is the first step from us, as citizens to help him achieve this goal as law and order is one of the biggest areas whereas a country, we need development.

The inspiration to begin with Presolv came while having a conversation with one of the founding members where we realized after having a professional experience that due to delay in judgments, it would cause a huge problem not only to companies but also to the families. As our prime minister Mr. Narendra Modi is promoting `Digital India’, this is the first step from us, as citizens to help him achieve this goal as law and order is one of the biggest areas whereas a country, we need development. 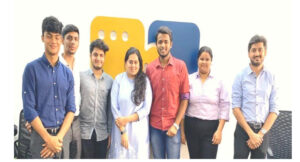 What inspired you and your partners to start Presolv360?

The inspiration to begin with Presolv came while having a conversation with one of the founding members where we realized after having a professional experience that due to delay in judgments, it would cause a huge problem not only to companies but also to the families. As our prime minister Mr. Narendra Modi is promoting `Digital India’, this is the first step from us, as citizens to help him achieve this goal as law and order is one of the biggest areas whereas a country, we need development.

How would you go about the scalability of your business?

Presolv360 is an online platform, every single thing happens online which means right from uploading your agreement to doing arbitration or mediation and even building a settlement agreement, all happens online. Since its online it is scalable as we run it like a platform. We have a panel of experts that step in when there is a dispute at the required stage to help the parties settle. So, we have a capacity of up to 100 people coming on together for one dispute and that is scalable to what is required.

Did you face any difficulties during the initial stage of your start-up?

I think the difficulties are what we face even today as it is said that if you really aim for perfection it stops your progress. We really believe that perfection is the enemy of progress and all that we strive to do is be better today than we were yesterday and tomorrow than we are today. Since there is no precedent to do something like this in India or even at the global level, we have had a lot of embarrassing moments in terms of the demo, in terms of it not working and sometimes a lot of other hassles but I think our biggest learning’s has been because those things have happened.

Would you like to tell us about the challenges Presolv faced?

We have faced a lot of them. We do something called mediation which is out of court talk. We went to a seminar once and there was this guy next to us and when things were going on about mediation, he was telling us ‘what these guys are going about’. He thought the seminar was on meditation. So that’s the level of awareness in our country. Even on Google if you search for mediation, there is a result which says, “Did you mean meditation”. So that is one of our biggest challenges that people don’t know that something like this exists and that something like this is legal. Sometimes they ask us if what we are doing is legal and we say we’ve been recognized by the Government of India- what more proof do you need that this is legal. So, a huge challenge is of course the awareness in the country. Secondly, it’s Law and Technology, because they just seem to be two opposite things so merging them has been a challenge which we are trying to overcome every day. 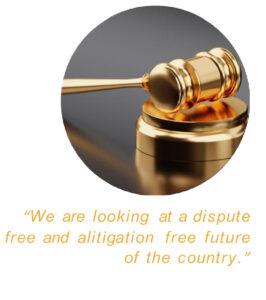 Would you call yourself a professional negotiator?

I would call myself an entrepreneur first and I think everyone is a negotiator in life. Right from asking your parents for a gift, to asking your girlfriend/ boyfriend out, anything is a negotiation. So yes, I am a negotiator, but I am an entrepreneur first. As far as Presolv360 is concerned, we have a panel of experts who do the negotiating and settling also. Personally, I don’t work on the plan. I run it more like a platform.

How easy or difficult is it to penetrate in the Indian market?

According to you what impact will your solution have on society?

I will anecdote about this one insurance claim and the ripple effect it had. There was a lady whose husband passed away in a motor accident and the claim was stuck for around 5-6 years. There were so many loans and she had no idea about what was happening in the court. We intervened in that matter and the amount was transferred to her bank account in 2 months. She immediately paid off the loans. She got her daughter married and now she is living with no financial stress. Now that is just one thing, today her children were impacted. She had been impacted. The insurance company has one less case. It also means there is one less case in court. There is one less resource which is going to be required to actually fight it off for years to come and that much less time the judge will have to spend on this case and that much less time India will spend on its judicial mechanism. So, it’s not just the people, it’s also the community and the courts that are impacted because the whole idea is that the more cases that are settled out of court; that much is less of the burden on the courts. Today with over 3 crore cases pending in courts by themselves, they are going to take 300 years to get resolved and on top of those 40,000 cases are filed every day in Indian courts. Now imagine if most of these cases settle. That is the impact of what we are trying to do. 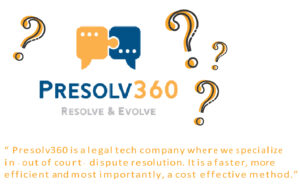 Do you think the government should take steps regarding the pending 3 crore cases?

And what do you think about the fast-moving courts? I think that is more theoretical than practical because that doesn’t seem to be happening. There are very few kinds of cases that have fast moving courts, for example if there is a senior citizen who is a litigant or if there is violence and abuse involved. But those fast-moving courts also take years. For example, look at Kasab, there was complete evidence that he had carried out certain terrorist activities in the nation and how many years did he take to get his punishment. That concept is really far in India but at the same time the government is taking initiative. In fact, they have recognized us as an online dispute resolution, an alternative dispute resolution provider and they in fact have also encouraged other governmental departments to come to us and settle their disputes . So, they are moving in that direction but there is still a long way to go.

What would you say about your competitors?

This industry is very nascent in India, there are very few companies. In fact, we are the only end to end online players. There are few companies where you can register your disputes online but then they move the process offline. But I feel that we need competitors also because of the sheer volume of the disputes in courts. Competition also means that you are moving in the right direction and that’s why there are other players also.

What is your future vision as your company grows?

We are looking at a dispute free and a litigation free future of the country. That is a huge statement but if it doesn’t scare you as much as it excites you at the same time, you are thinking too small.

Since you were a part of Agnii for India, what message would you like to give to the young people?

The only thing to do is to START. I think once you start you can figure out the rest of the journey. There is nothing that is going to prepare you to see every step till the end. All that you need is to take the first step, especially for young females. In fact, being a female is an asset and not a liability when you actually try to start your own journey. There are a lot of government and non-governmental programs meant for women to guide them, to help them, I myself have been part of many. Use your gender to your strength in terms of exploring these opportunities and in terms of just going ahead and doing it. Statistically and historically, women are considered to be better at leading companies, so use that. Don’t let the world tell you what you can’t do, just show them what you can do. 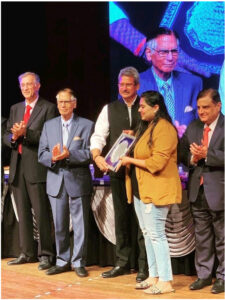 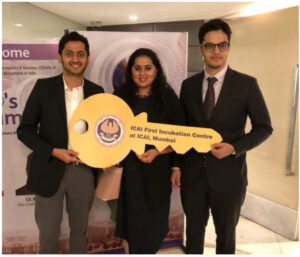 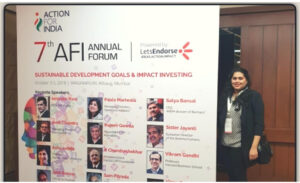 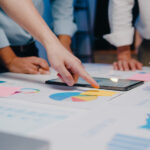 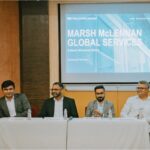